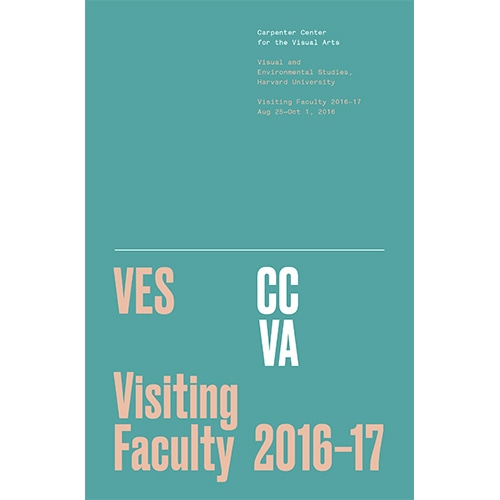 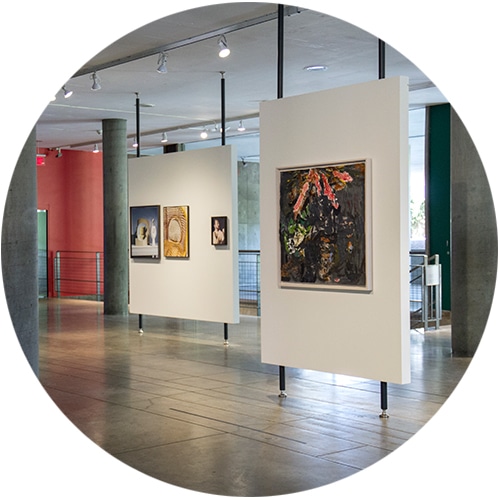 The Department of Visual and Environmental Studies is home to a range of studio and theoretical studies in the arts at Harvard University. It offers courses in painting, drawing, sculpture, film, video, and animation, as well as photography, film history and theory, studies of the built and natural environment, and contemporary art. The academic experience transpires partially in the Carpenter Center for the Visual Arts, where thinking and making—physical contact with various materials—intersect to enable students from a variety of disciplinary studies to be aware of their visual environment.

The Visiting Faculty 2016–17 exhibition presents work by six visiting faculty in Visual and Environmental Studies. In fact, each year for almost fifty years, the department has invited visual artists and filmmakers who are leaders in their fields to work closely with students, invigorating and enriching the academic program and curriculum with their outside perspectives and professional experiences. This year is no exception as the department welcomes Lucas Blalock, Jennifer Bornstein, Paul Bush, Dru Donovan, Guy Maddin and Kianja Strobert with a sampling presentation of their work.

Lucas Blalock’s work engages the ways that falseness or evident mechanics in photographs can bring both the picture and the pictured into sharper focus. He pursues this through a variety of overlapping strategies (often involving Photoshop) that in some way alienate the “natural” view generally associated with photographic pictures. Blalock’s work employs this expanded notion of the photograph to consider a world that is ever more inhabited by the plasticities of the virtual.

Blalock’s pictures have been included in recent exhibitions at the Museum of Modern Art, the the Walker Art Center, the Hammer Museum, the Albright-Knox Art Gallery, and the Metropolitan Museum of Art. He has made a number of artist books including Towards a Warm Math (Hassla, 2011), Windows Mirrors Tabletops (Morel, 2013), Inside the White Cub (Peradam, 2014) and SPBH Subscription Series Vol. IIV (Self Publish Be Happy, 2014). Blalock is also active as a writer and has published in a number of artist’s books and periodicals including Aperture, Foam, Mousse, and Objectiv. Blalock was born in 1978 in Asheville, North Carolina and currently lives in Brooklyn, NY.

Bornstein is an artist who works in diverse media, including video, 16-millimeter film, and etching. Based in Berlin, she received an MFA from the University of California, Los Angeles, a BA from the University of California, Berkeley, and participated in the Whitney Museum's Independent Study Program. She has received numerous awards and grants, including a DAAD Berliner Künstlerprogramm fellowship, a Sharpe Foundation grant, and a Pollock-Krasner Foundation grant. Her work has been widely exhibited in the United States and Europe, including solo shows at the Museum of Contemporary Art, Los Angeles and the Stedelijk Museum, Amsterdam, as well as group exhibitions at the Hammer Museum, Los Angeles, Centre Georges Pompidou, Paris, Serpentine Gallery, London, and Menil Collection, Houston, among others. She was a Radcliffe Institute Fellow in 2014–15.

Paul Bush is a filmmaker most well-known for experimental stop frame animation. He has made numerous short and medium length films including The Cows Drama (1984), His Comedy (1994), Rumour of True Things (1996), Furniture Poetry (1999), Dr Jekyll and Mr Hyde (2001) and While Darwin Sleeps (2004). In 2013 his feature film Babeldom was released in UK cinemas. He has won many awards and his films have been shown in festivals, cinemas, galleries and on television all round the world.

He began teaching in 1981 and established a film workshop in South London. He taught on the visual arts course at Goldsmiths between 1995 and 2001 and at the National Film and Television School since 2003. Bush has lectured, run workshops and tutored at numerous art and film courses around the world including Luzern University and Centro Sperimentali di Cinematografia in Italy. There have been retrospective programs of his films recently in Ghent, Turin, Bogota, Budapest, Bristol and London.

Dru Donovan received a BFA from California College of the Arts in 2004 and an MFA from Yale School of Art in 2009. Her photographs examine the connection between physical and emotional occurrences by constructing or revisiting human experiences. Donovan’s work has shown nationally and internationally and was included in reGeneration2: Tomorrow’s Photographers Today at the Musée de l’Elysée in Lausanne, Switzerland, and in the 2010 California Biennial at the Orange County Museum of Art, Fraenkel Gallery, Yancey Richardson Gallery, Hap Gallery and Philadelphia Photo Arts Center. Donovan’s photographs were published in Aperture Magazine, Blind Spot, Picture Magazine and Matte Magazine. In 2011 TBW Books published her first book, Lifting Water. In 2011-2012 she participated in the Lower Manhattan Cultural Council’s. Workspace studio residency. Awards Donovan has received are the John Gutmann Photography Fellowship in 2015 and the John Simon Guggenheim Memorial Foundation Fellowship in 2016.

Guy Maddin is an installation & internet artist, writer and filmmaker, the director of eleven feature-length movies, including The Forbidden Room (2015), My Winnipeg (2007), The Saddest Music in the World (2003), and innumerable shorts. He has also mounted around the world over seventy performances of his films featuring live elements—orchestra, sound effects, singing and narration.

In the spring of 2016 he launched his major internet interactive work, Seances, which enables anyone online to "hold séances with," or view, randomly combined fragments of canonical lost films remade by Maddin on sets installed in public spaces, most notably during three weeks of shooting at the Centre Georges Pompidou in Paris.

Twice Maddin has won America's National Society of Film Critics Award for Best Experimental Film, with Archangel (1991) and The Heart of the World (2001). He has been bestowed many other awards, including the Telluride Silver Medal in 1995, the San Francisco International Film Festival's Persistence of Vision Award in 2006, and an Emmy for his ballet film Dracula—Pages from a Virgin's Diary (2002). Maddin is a print journalist and author of three books. He is also a member of The Order of Canada & The Order of Manitoba.

Kianja Strobert received her BFA from the School of the Art Institute of Chicago in 2004 and then earned her MFA from the Yale School of Art in 2006.  She has exhibited her work in galleries and museums throughout the U.S. including Tilton Gallery and Zach Feuer Gallery in New York, The Santa Monica Museum of Art in Los Angeles, The Contemporary Arts Museum in Houston, and Vox Populi Gallery in Philadelphia. Most recently, in 2014, The Studio Museum Harlem mounted a major solo exhibition titled, Of this Day in Time.