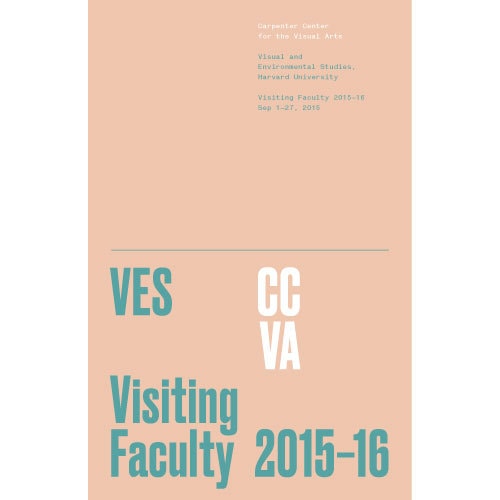 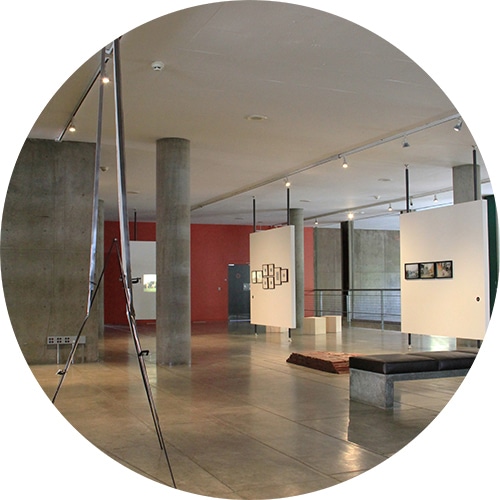 The Department of Visual and Environmental Studies is home to a range of studio and theoretical studies in the arts at Harvard University. It offers courses in painting, drawing, sculpture, film, video, and animation, as well as photography, film history and theory, studies of the built and natural environment, and contemporary art. The academic experience transpires partially in the Carpenter Center for the Visual Arts, where thinking and making—physical contact with various materials—intersect to enable students from a variety of disciplinary studies to be aware of their visual environment.

The VES Visiting Faculty 2015–16 exhibition presents work by four visiting faculty in Visual and Environmental Studies. In fact, each year for almost fifty years, the department has invited visual artists and filmmakers who are leaders in their fields to work closely with students, invigorating and enriching the academic program and curriculum with their outside perspectives and professional experiences. This year is no exception as the department welcomes Jennifer Bornstein, Liz Glynn, Betsy Schneider and Nora Schultz with a sampling presentation of their work.

Bornstein is an artist who works in diverse media, including video, 16-millimeter film, and etching. Based in Berlin, she received an MFA from the University of California, Los Angeles, a BA from the University of California, Berkeley, and participated in the Whitney Museum's Independent Study Program. She has received numerous awards and grants, including a DAAD Berliner Künstlerprogramm fellowship, a Sharpe Foundation grant, and a Pollock-Krasner Foundation grant. Her work has been widely exhibited in the United States and Europe, including solo shows at the Museum of Contemporary Art, Los Angeles and the Stedelijk Museum, Amsterdam, as well as group exhibitions at the Hammer Museum, Los Angeles, Centre Georges Pompidou, Paris, Serpentine Gallery, London, and Menil Collection, Houston, among others. She was a Radcliffe Institute Fellow in 2014–15.

Glynn works in sculpture, large-scale installations, and performances, and her work often explores the relationship between objects and narratives. Based in Los Angeles, she is a graduate of the Department of Visual and Environmental Studies and received an MFA from CalArts. Recent solo exhibitions include Ransom Room at the SculptureCenter, Long Island City, Hold Nothing, ArtPace, San Antonio, and On the Possibility of Salvage,  Paula Cooper Gallery, New York. Glynn has taught at UCLA, Otis College of Art and Design, Art Center College of Design, and the California Institute of the Arts. In 2011, she was the Josep Luis Sert Practitioner at the Carpenter Center.

Schneider is a photographer and filmmaker who explores and documents transformations of individuals and families over time and place. She holds a BA from the University of Michigan, a BFA from the School of the Art Institute of Chicago, and an MFA from Mills College in Oakland, California. In 2002 she joined the School of Art faculty at Arizona State University where she is currently Associate Professor. Her work has been exhibited nationally and internationally and is part of notable collections including the Museum of Fine Arts Houston, The Nelson-Atkins Museum in Kansas City, and the Museet for Fotokunst in Odense, Denmark. She serves as a National Board member for the Society for Photographic Education and was Co-Chair of the 2012 National Conference in San Francisco. In 2011 she was named a Guggenheim Fellow.

Schultz is a German artist who creates sculptural installations involving methods of archeology, anthropology, and linguistics. Often, her sculptural works are also the protagonists of her performances. Schultz earned her degree from Städelschule, Frankfurt/Main, and she has also studied at the Milton Avery Graduate School of the Arts, Bard College. Some of her recent solo exhibitions include I am Honda at Reena Spaulings Fine Arts, New York, Terminal + at Tate Modern, Performance Room, London,  Parrottree, Building for Bigger Than Real at the Renaissance Society, Chicago, and Stative auf der Flucht/The Tripod's Escape at Isabella Bortolozzi Galerie, Berlin.