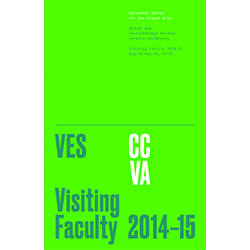 Each year, the Department of Visual and Environmental Studies extends invitations to leading practitioners in these fields to teach courses. For almost fifty years, visiting filmmakers and visual artists have worked closely with students and made a significant impact on the curriculum, as well as contributed to the overall creative and intellectual life of the university. This illustrious history includes many important figures, ranging from György Kepes, Rudolf Arnheim, and Marie Cosindas to Nan Goldin, Barry La Va, and Isaac Julien. In sharing their experiences, knowledge, insights, and pedagogical approaches, visiting faculty introduce students to new interests and territories of study, while engaging themselves with the campus’s valuable resources, faculty, and the Boston-area community.

The 2014–15 academic year is no exception. This exhibition presents work by five visiting faculty who come to Harvard from disparate locations and possess an impressive range of expertise and perspectives. What unites them, however, is an insatiable curiosity about the world, which they explore through their evolving materials and methods. Their practices embrace experimentation and uncertainty, essential ingredients to creativity and innovation. In fact, these are the qualities that undergird the pursuit of knowledge at Harvard University, a legacy to which these artists richly contribute.

Bush is a filmmaker known for experimental stop-frame animation. He has made short and medium-length films including The Cows Drama (1984), His Comedy (1994), Rumour of True Things (1996), Furniture Poetry (1999), Dr. Jekyll and Mr. Hyde (2001) and While Darwin Sleeps (2004). In 2013 his feature film Babeldom was released in UK cinemas. He has won numerous awards and his films have been shown in festivals, cinemas, galleries and on television all round the world. Bush lives and works in London.

Hilliard exhibits his photographs both nationally and internationally and is a recipient of the Fulbright and Guggenheim. His works are in collections including the Whitney Museum of American Art, New York; Museum of Fine Arts, Boston; Museum of Contemporary Art, Los Angeles and the Philadelphia Museum of Art. Hilliard is based in Boston, Massachusetts.

Rodman has exhibited at Guild & Greyshkul, New York; Institute of Contemporary Art at Maine College of Art; and at Los Angeles Contemporary Exhibitions. His solo exhibitions include Soloway, Brooklyn, New York and group exhibitions at Laurel Gitlen, New York and Sue Scott Gallery, New York. Rodman's project Gradually/We Became Aware/Of A Hum in the Room is on view through August 2015 at High Desert Test Sites with a second phase opening at Art In General, New York, September 2015. He is based in New York, New York.

Tsangari is a filmmaker, producer and projections designer. She has made numerous short and feature-length films including The Slow Business of Going (2001), Attenberg (2010) and 24 Frames per Century (2013). She was co-founder and artistic director of the Cinematexas International Short Film Festival (1997–2007) in Austin, Texas and is founder of Haos Film, a filmmaker-run production and post-production studio in Athens since 2004. The film The Capsule (2012), made in collaboration with Polish artist Aleksandra Waliszewska, premiered at dOCUMENTA(13) in Kassel. Her work is featured at numerous film festivals and included in museum collections such as MoMA, New York. Tsangari is based in Athens, Greece.