Frame by Frame: Animated at Harvard 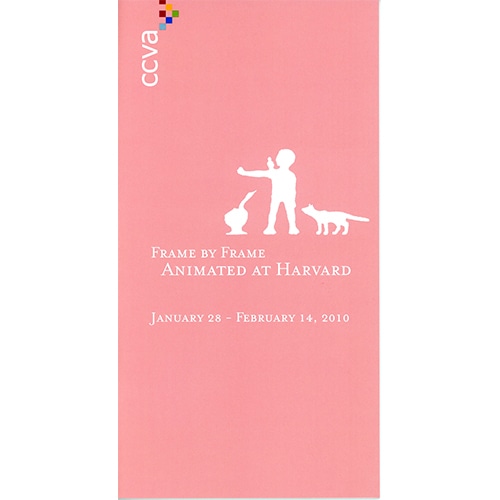 The Carpenter Center for the Visual Arts at Harvard University presents Frame by Frame: Animated at Harvard, an exhibition showcasing Harvard’s animation history: rarely-seen films retrieved from the Harvard Film Archive, works by world-renowned recent animation faculty, and a survey of films by current and former students of the department.

Animation tends to be a condensed art form, using metamorphosis and metaphor to collide and expand meaning. In this way it resembles poetry. It is a way of expressing and communicating invisible, abstract ideas, allowing us to analyze and deconstruct time and to understand movement as both a liquid flow and a sequence of distinct infinitesimals. While only a few students specialize in animation for their final thesis work, a wide range of students take one or two animation classes during their time at Harvard. Students are encouraged to use the particular demands and rewards of animation to help them think differently about the world.

Frame by Frame: Animated at Harvard will feature classic films from the Harvard Film Archive including Caroline Leaf’s Sand, or Peter and the Wolf, a loose interpretation of the fable Peter and the Wolf. The film marks the start of Leaf's technique of under-the-camera animation, which she developed in subsequent films; in her hands the extraordinary graphic possibilities of sand are revealed. Produced during a stay at Harvard’s Film Study Center by famed Polish animator and poster designer Jan Lenica, Landscape (1974) invokes the artist’s Nazi occupation experience. Asparagus (1979), by Suzan Pitt, was called “…one of the most lavish and wondrous animated shorts ever made, an overwhelming visual experience.” by award-winning animator and animation historian John Canemaker.

Frame by Frame will also feature a wide selection of student films, including early films of historical significance as well as work from animation classes at Harvard over the last five years. The pioneering Clay or Origin of Species (1965), by Eli Noyes, received an Academy Award nomination for Best Animated Short Subject and is one of the earliest examples of clay animation. Frank Film (1973), by Frank Mouris, won the Academy Award for Best Animated Short Subject in 1974 and was selected for preservation in the United States National Film Registry by the Library of Congress in 1996. On view by Amy Kravitz, BA Harvard, MFA Cal Arts and currently professor of animation at the Rhode Island School of Design, is River Lethe (1985), an abstract visual poem in five parts created using atypical materials such as rubbed and erased graphite, pigment, and aluminum powders. I hate you don’t touch me or Bat and Hat, by Becky James (Harvard ‘07) won Special Jury Award for Animated Shorts in the 2008 SXSW Film Festival in Austin, Texas.

Other student work includes Rorschach (2006), by Tessa Johung, an inkblot test that asks us to recognize the subconscious within the physical human body; Plume (2006), by Maya Erdelyi-Perez, a cut-paper animation about birth, love and the cycles of life; Leftovers (2006) by Tim Reckart, a story of unrequited love between an old man who wants a friend and a squirrel who wants a sandwich; Katharine Woodman-Maynard’s The Space Inside (2008), a film that looks at the relationship between rural and urban life; Do Rivers (2009), by David Rice, exploring the relationships between people and landscapes as mediated by fantasy and nightmare; and Kapsis (2009), an 8 minute video-art piece by Yen-Ting Cho, portraying a Nahua myth of a young girl who becomes a starfish.