Anna Oppermann: Drawings will feature a survey of this underrecognized German artist’s early drawings alongside one of her renowned “ensemble” installations, and will be the first solo exhibition of her work in the United States in twenty years. Beginning in the mid-1960s through the early ’70s, Oppermann (1940–1993) created an astonishing series of surreal, almost psychedelic drawings that uniquely and quietly explode the private space of the home, and her experience within it. These early drawings contribute to a feminist re-centering of spheres traditionally associated with women, casting everyday objects as symbolic, consequential protagonists: houseplants sprawl to take over the picture plane, windows and mirrors provide views into other worlds, and tables display drawings that themselves open out into new domestic scenes. By placing her own body—her knees, arms, the back of her head—as reference points in the work, Oppermann coaxes the viewer to take on her subjectivity and perspective, emphasizing the gendered realms of the home and the relationships that we form both within and to our private spaces.

The exhibition will also include an early transitional “ensemble” that connects Oppermann’s drawing practice to the room-filling, image-based installations for which she would become best known. Combining large drawings, photographs of drawings, and photo-canvases of displays of drawings and more photographs in space, alongside actual objects, the artist borrowed equally from the display methods of museums, informal memorials, home interiors, and retail stores to create the “ensembles.” Beginning with a makeup mirror, she constructed these installations through an observation of optical reflections, using the rectangular mirror to duplicate, shift, and expand the perception of interior space to be reflected from multiple, often overlapping viewpoints.

With the exception of a single-work exhibition at P.S. 1 Contemporary Art Center in New York City in 1999, and her inclusion in the group exhibition The Everywhere Studio at the Institute of Contemporary Art, Miami, in 2017, Anna Oppermann’s work has rarely been exhibited in this country. The Carpenter Center’s accompanying publication will be the first Oppermann book produced in the United States and will feature new writing on her work. By focusing on her drawings, the foundational works that would influence the themes and lexicon of the large-scale installations later in her career, Anna Oppermann: Drawings lays the groundwork for another institution to take up the task of producing a full retrospective of this remarkable artist.

Anna Oppermann: Drawings is curated by Dan Byers, John R. and Barbara Robinson Family Director of the Carpenter Center for the Visual Arts at Harvard University. 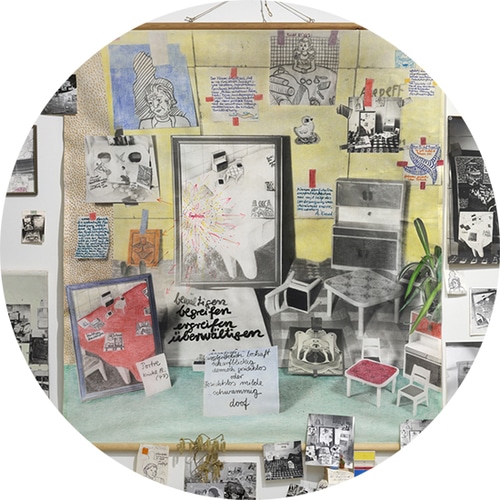