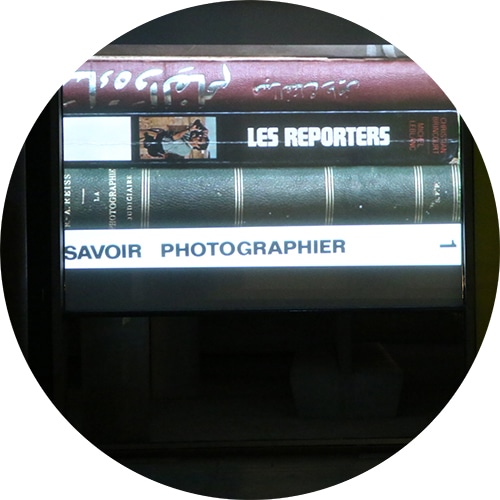 Artist Anna Craycroft and art historian Ann Reynolds will be in conversation about Craycroft’s project for The Artist’s Museum, The Earth is a Magnet, which traces relationships between photographer Bernice Abbott and nine contemporary artists, and Reynold’s forthcoming book, In Our Time, which address the cinematic and social circumstances of various intergenerational creative communities in New York during the 1940s through the 1960s.

Following will be Pierre Leguillon’s performative work The Promise of the Screen (2007–), which doubles as a film screening and a speakeasy, dedicated to the peripheral aspects of cinema. For the CCVA, Leguillon will present the Photography Manual, an anthology of film sequences to “teach, to frame, to trigger, to illuminate, to develop but also, perhaps, to commit suicide with the camera.”  The film montage is based on technical and popular books preserved at the Société française de Photographie in Paris, detailing the multiple uses of the medium: from fashion photography to judicial photography, amateur photography or photo-journalism.

Programs presented in conjunction with the ICA/Boston’s exhibition The Artist’s Museum, (on view at ICA/Boston through Mar 26, 2017). This exhibition is organized by Dan Byers, Mannion Family Senior Curator, with Jeffrey De Blois, Curatorial Associate.

A fully illustrated catalogue features texts by Byers, Claire Bishop, Lynne Cooke, and Ingrid Schaffner. The catalogue is available in the CRC/bookshop on Level 3.

Dan Byers is the Mannion Family Senior Curator at The Institute of Contemporary Art/Boston. His ICA exhibitions include The Artist’s Museum, Diane Simpson, Geoffrey Farmer, Steve McQueen: Ashes, and The 2017 Foster Prize Exhibition. Before his move to Boston, Byers was the Richard Armstrong Curator of Modern and Contemporary Art at Carnegie Museum of Art, where he was co-curator, with Daniel Baumann and Tina Kukielski, of the 2013 Carnegie International. In addition to the International, projects there included solo exhibitions of Cathy Wilkes, Ragnar Kjartansson, and James Lee Byars. Byers was Curatorial Fellow at the Walker Art Center in Minneapolis and Assistant to the Directors at the Fabric Workshop and Museum in Philadelphia.

Mining fields like education, cinema, psychology, literature and art history Anna Craycroft examines cultural models for fostering individuality. Through drawings, paintings, videos, sculptures, furniture, installations, books, workshops, or curatorial projects she works thematically on a single thesis over a series of exhibitions. Craycroft has had solo shows at the Ben Maltz Gallery at the Otis College of Art and Design, Portland Institute for Contemporary Art in Portland Oregon, the Blanton Museum of Art in Austin Texas, Tracy Williams Ltd in NYC, Le Case del Arte in Milan Italy, and a two-persons exhibition at REDCAT Gallery in Los Angeles, Sandroni Rey in Los Angeles and the Fundacio Miro in Barcelona. In November 2016, the artist debuted a major new commission, The Earth Is a Magnet, as part of the ICA Boston exhibition, The Artist’s Museum.

Ann Reynolds is an Associate Professor in the Department of Art and Art History and the Center for Women’s and Gender Studies at the University of Texas at Austin. In her research and teaching, she focuses on twentieth and twenty-first century art and visual culture in the United States and Europe. Her recent publications include essays on Joan Jonas for the 2015 Venice Biennale; the experience of remoteness in relation to land art (Centre Georges Pompidou Spring 2015); Bob Fleischner, Jack Smith, and Ken Jacobs’ film Blonde Cobra (Criticism Spring 2014); Charles Simonds’ Urban Dwellings (Dumbarton Oaks, 2011). She is the author of Robert Smithson: Learning From New Jersey and Elsewhere (MIT Press, 2003). She is currently working on a new book entitled In Our Time, as well as co-curating an exhibition focused on the magazine View (1940-1947).

Pierre Leguillon, born in Nogent-sur-Marne, France, in 1969, lives and works in Brussels. His works, performances, and projections have been the subject of many monographic presentations, notably at Raven Row (London, 2011), Mamco (Geneva, Switzerland, 2010), Moderna Museet (Malmö, Sweden, 2010), the Musée du Louvre (Paris, 2009), and Artists Space (New York, 2009). The artist, whose work La grande evasion (The great escape), 2015, is included in The Artist’s Museum at ICA/Boston, presented two installations at the 2013 Carnegie International, held in Pittsburgh in 2013: A Vivarium for George E. Ohr and Dubuffet Typographer the latter being accompanied by a book published by (SIC) in Brussels. A laureate of the Villa Médicis in 2003, Leguillon teaches at HEAD (Haute Ecole d’Art et de Design) in Geneva.