Join us at 7:30 pm EST for a live Zoom conversation between Kemi Adeyemi, Assistant Professor of Gender, Women, and Sexuality Studies at the University of Washington and Director of the Black Embodiments Studio; Jessica Bell Brown, Associate Curator for Contemporary Art at the Baltimore Museum of Art; Lauren Haynes, Curator of Contemporary Art at Crystal Bridges Museum of American Art in Bentonville, Arkansas, and Curator of Visual Arts at the Momentary, also in Bentonville; and Jamillah James, Curator at the Institute of Contemporary Art, Los Angeles. This conversation is a continuation of a recently published oral history project initiated by Adeyemi, “Black Women Curators, A Brief Oral History of the Recent Past,” which documents the perspectives of Black women curators working in the United States from the mid-2000s onward. 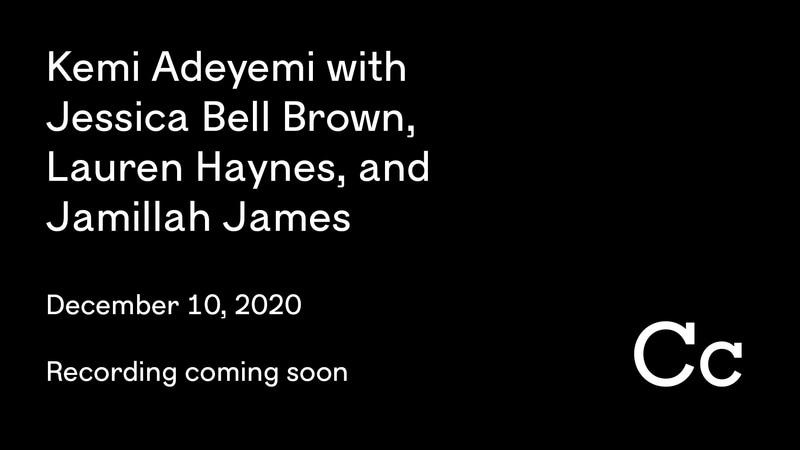 For each of its fall conversations, the Carpenter Center will publish a limited-edition booklet with an edited transcript of the exchange, images, and biographical material. These booklets will be made available for free both as digital downloads and in hard copy upon request. In this time of online gathering, this publication series is meant to serve as a material record of Carpenter Center programming and an art historical resource for future scholars and artists.

Kemi Adeyemi is Assistant Professor of Gender, Women & Sexuality Studies at the University of Washington. She is currently writing her book, Making New Grounds: Black Queer Women’s Geographies of Neoliberalism, which explores the sonic, affective, and embodied methods Black queer women have for taking pleasure in the neoliberal city, and she is in the process of co-editing Queer Nightlife, a collection that documents the diverse expressions of queer nightlife worldwide.

Adeyemi’s writing has or will appear in GLQ: A Journal of Lesbian and Gay Studies, Women & Performance, Transgender Studies Quarterly, Gulf Coast: A Journal of Literature and Fine Arts, and QED: A Journal of GLBTQ Worldmaking. She has contributed exhibition essays for Tschabalala Self (Seattle), This is Not a Gun (Los Angeles), black is a color (Los Angeles), Impractical Weaving Suggestions (Madison), and Endless Flight (Chicago); and writings on artists including taisha paggett, Liz Mputu, Adee Robinson, Brendan Fernandes, Oli Rodriguez, and Indira Allegra. Adeyemi co-curated the unstable objects exhibition at The Alice Gallery in 2017 and curated Amina Ross’s October 2019 solo show at Ditch Projects. Adeyemi is Director of The Black Embodiments Studio, a writing residency dedicated to developing arts criticism that queries how definitions of blackness are produced and expressed through visual, aural, and affective realms—engaging three domains that underwrite the physical and metaphysical dimensions of inhabiting black skin.

Jessica Bell Brown is the Associate Curator for Contemporary Art at the Baltimore Museum of Art. Prior to joining the BMA, Brown helmed roles at Gracie Mansion in New York, Creative Time, the Brooklyn Academy of Music, and MoMA. A Ph.D. candidate in Modern and Contemporary Art at Princeton University, her writing has appeared in catalogs and publications for The Studio Museum in Harlem, MoMA, New Museum, ICA Philadelphia, The Renaissance Society, Lévy Gorvy, Flash Art, Artforum, Art Papers, Aperture Magazine, and The Brooklyn Rail.

Haynes was a 2018 Center for Curatorial Leadership fellow. She is co-curator of the inaugural Tennessee Triennial for Contemporary Art taking place across Tennessee in 2021.

Jamillah James is Curator at the Institute of Contemporary Art, Los Angeles (ICA LA). Recent exhibitions include the surveys No Wrong Holes: Thirty Years of Nayland Blake (2019) and This Has No Name, the first US museum survey of B. Wurtz (2018), as well as solo exhibitions with Harold Mendez, Stanya Kahn, Ann Greene Kelly, Lucas Blalock, Maryam Jafri, rafa esparza, among others. James is co-curator of the 2021 edition of the New Museum Triennial. She has held curatorial positions at the Hammer Museum, Los Angeles; the Studio Museum in Harlem, New York; the Queens Museum, Flushing, New York; and independently organized several exhibitions and programs throughout the US and since 2004.