Doug Ashford is an artist, teacher and writer based in New York. He is Associate Professor at The Cooper Union for The Advancement of Science and Art where he has taught sculpture, design, and interdisciplinary studies since 1989. Ashford’s principle visual practice from 1982 to 1996 was the artist’s collective Group Material, which produced over forty exhibitions and public projects internationally. Since 1996 he has continued to produce paintings, essays and collaborative projects that engage sociality in artistic form. His most recent public effort ended in the project Who Cares (Creative Time, 2006), a book built from a series of conversations between Ashford and an assembly of other cultural practitioners on public expression, ethics, and beauty. His work with Group Material has been compiled in Show and Tell: A Chronicle of Group Material (Four Corners Books, 2010). Recent exhibitions of paintings and installations include the Sharjah Biennial 10 (2011); “Abstract Possible”, Malmo Konsthall, the Museo Tamayo, Tensta Konsthall and other locations (2010-12); dOCUMENTA 13, Kassel (2012). A collection of essays, Doug Ashford: Writings and Conversation, (Mousse Publishing, 2013), was published on the occasion his recent exhibition at Grazer Kunstverein,(2013).

The talk by Doug Ashford occurs in conjunction with the exhibition Living as Form (The Nomadic Version), on view on Level 1 + Level 3, Sert Gallery, from Feb 7–April 6, 2014. 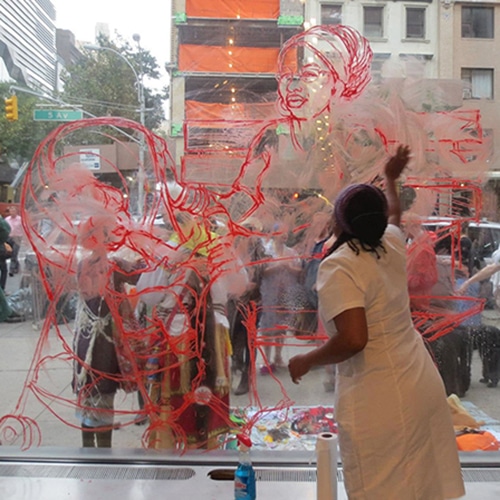