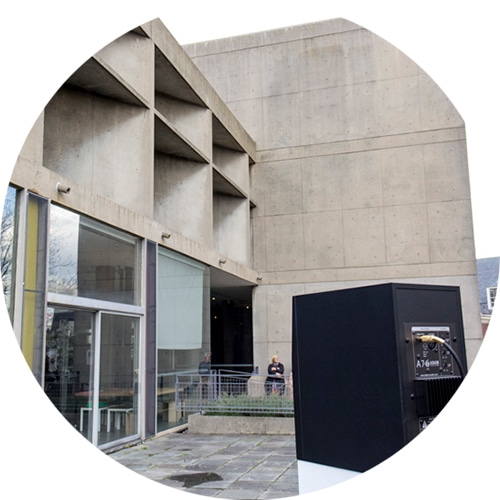 In collaboration with the exhibition Listen Hear: The Art of Sound at the Isabella Stewart Gardner Museum, sound artist and Harvard faculty Ernst Karel will play the Carpenter Center for an evening event of sound interventions throughout the Le Corbusier building. Following will be a discussion about sound, architecture, and the city with Karel, artists Sam Auinger and Andy Graydon, and exhibition curator Pieranna Cavalchini. Curator and CCVA interim director Dina Deitsch will moderate the panel.

The design and conception of the Carpenter Center is rife with acoustic metaphors and concerns. Le Corbusier’s original sketch of the building centered on an ascending spiral that would carry “electric ringing sounds,” inspired by the university’s bell towers and the curved concrete spaces remain notorious echo chambers for voices, music, and even the roar of a city bus. Le Corbusier used the term “Architecture Acoustique” to refer not just to a building’s sound properties, which deeply concerned his later designs, but the effect of a work on its surroundings and subsequent capacity to reorder behavior and movement.

The event will utilize the Carpenter Center’s distinctive acoustic properties and delve into the current field of experimental sound as a spatial form. There will be listening portions to this event on Level 1, followed by a discussion with the artists and curators on Level 3, CRC/bookshop.

Lecturer on Anthropology, Harvard University
Ernst Karel makes experimental nonfiction sound works for multichannel installation and performance.  His recent projects are edited/composed using unprocessed location recordings; in performance, he sometimes combines these with analog electronics to create pieces which move between the abstract and the documentary. Recent sound projects have been presented at EMPAC, Troy, NY; Arsenal, berlin; and the 2014 Whitney Biennial. Sound installations in collaboration with Helen Mirra have been exhibited at KW institute for Contemporary Art, Berlin, MIT List Visual Arts Center, Cambridge, MA; and in the 2012 Sao Paulo Bienal. Karel is assistant director of the Sensory Ethnography Lab at Harvard University, where as lecturer on Anthropology, he teaches a class in sonic ethnography. Karel and Teri Rueb’s Fens is featured in Listen Hear as well as a collaborative work, Municipals, 2017 with Helen Mirra.

Together with Bruce Odland he founded the collaboration O+A in 1989, exploring the central theme of “hearing perspective”. Their work is known for large scale, public space sound installations that transform city noise into harmony in real-time. 2009 O+A started on the “Sonic Commons” questioning the dominance of the visual culture in our perception of the world (www.o-a.info). Besides his longtime artistic collaboration with Bruce Odland he is a founding member of “stadtmusik”, a collaboration between the Berlin-based composers Sam Auinger and Hannes Strobl with the media artist and urbanist Dietmar Offenhuber (www.stadtmusik.org). Auinger is currently Visiting Lecturer in MIT’s program in art, culture and technology. Auinger’s work, Harmonic Conduit, 2017 is on view in Boston’s Ruggles T Station as part of Listen Hear: The Art of Sound.

Andy Graydon explores experiences of absence and displacement, such as those encountered in travel, in writing and in recording. This work across media has been exhibited, screened, performed and published internationally, including shows at the New Museum, Art in General, and Participant Inc. (all New York); Berlinische Galerie, Berlin; the Frye Art Museum, Seattle; Massachusetts Museum of Contemporary Art, MA; Utah Museum of Contemporary Art, Salt Lake City; Honolulu Museum of Art, Hawaii; the Hong Kong & Shenzhen Biennale of Urbanism/Architecture; Galerie Stadtpark, Krems, Austria; Kunsthalle Exnergasse, Vienna; and PROGRAM Initiative for Art and Architecture Collaborations, Berlin. Graydon is currently on faculty at the School of the Museum of Fine Arts at Tufts University. On May 13, Graydon will debut Gathering Note, an open choral arrangement as part of a series of public art performances on the Cambridge Common, Common Exchange.